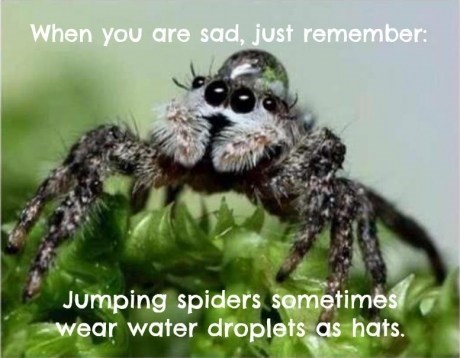 And here we see one of my favorites of the arachnid world, the Jumping Spider who is looking oh so cute.  Hehehe.

Species Information:
Haploplema lividum is a psychotic, high-strung burrowing species from Southeast Asia found in tropical forests. They like high humidity and temperatures. There is an excellent caresheet for this species at petbugs.com.

Feeding:
Being an adult, the big girl doesn’t eat lots, but she likes her crickets. She’s big enough to take down some substantial sized prey, and she has accepted a roach and zoophoba when offered. The smaller one is still on fairly small crickets.

Not sure what she’s munching, but it’s not my hand.

Housing:
She lives in one half of a 10 gallon aquarium with deep bedding, a water dish and a cork shelter. Check out the breeding page for more details on this breeding tank. The smaller one lives in a small round pet-pal.
She started burrowing as soon as she was moved into this cage, and really has a fantastic burrow going. It goes straight down the corner of the cage behind the cork shelter, then around the side. The turret at the top is like a giant cartoon anthill.

The humidity outside the burrow isn’t particularly high, but it’s probably up around 80% in the burrow. The temp in the spider room is 80-84°F.

Temperment:
The big girl is the psychotic monster that is so well know to those who dare keep her! She’s quite unpredictable and may appear calm, but suddenly lash out at the slightest provocation. Chasing this girl around the room is a most disconcerting experience. She mostly hides in her burrow, but will occasionally venture out for a week-long vacation. Of all the spiders in my collection, this is the one I would least like to wake up next to…
The baby is not quite so nasty, but it is naughty and will go on a runabout if bothered. Surprisingly fast little bugger.

Ever been so scared to go to the loo at night, turn on the light, and there is a dirty big spider on the toilet seat?  Maybe you went to the kitchen to get a late night snack, and that huntsman gave you a heart attack?

Well, lets look at what is like to have a fear of spiders.

Arachnophobia or arachnephobia (greek for “spider”, “fear”) is a specific phobia, the fear of spiders and other arachnids such as scorpions. It is a manifestation of zoophobia, among the most common of all phobias.  The reactions of arachnophobics often seem irrational to others (and sometimes to the sufferers themselves). People with arachnophobia tend to feel uneasy in any area they believe could harbor spiders or that has visible signs of their presence, such as webs. If arachnophobics see a spider they may not enter the general vicinity until they have overcome the panic attack that is often associated with their phobia. In some extreme cases, even a picture or a realistic drawing of a spider can also trigger fear. Arachnophobics may feel humiliated if such episodes occur in a social setting.

The fear of spiders can be treated by any of the general techniques suggested for specific phobias. As with all phobias, the strength of the associations means the individual must not actively pursue the consequences, and outsiders should not in any way undermine and “play” with the phobia in the meantime.

An evolutionary reason for the phobias, such as arachnophobia, claustrophobia, fear of snakes or mice, etc. remains unresolved. One view, especially held in evolutionary psychology, is that the presence of venomous spiders led to the evolution of a fear of spiders or made acquisition of a fear of spiders especially easy. Like all traits, there is variability in the intensity of fears of spiders, and those with more intense fears are classified as phobic. Spiders, for instance, being relatively small, don’t fit the usual criterion for a threat in the animal kingdom where size is a factor, but nearly all species are venomous, and although rarely dangerous to humans, some species are dangerous. Arachnophobes will spare no effort to make sure that their whereabouts are spider-free, hence they would have had a reduced risk of being bitten in ancestral environments. Therefore, arachnophobes may possess a slight advantage over non-arachnophobes in terms of survival. However, this theory is undermined by the disproportional fear of spiders in comparison to other, potentially dangerous creatures that were present during Homo sapiens environment of evolutionary adaptiveness. Studies with crickets have shown that a fear of spiders can develop before birth.

The alternative view is that the dangers, such as from spiders, are overrated and not sufficient to influence evolution. Instead, inheriting phobias would have restrictive and debilitating effects upon survival, rather than being an aid. For some communities such as in Papua New Guinea and South America (except Chile, Brazil, Uruguay, Argentina and Bolivia), spiders are included in traditional foods. This suggests arachnophobia may be a cultural, rather than genetic trait.
In Western societies as many as 55% of females and 18% of males are estimated to experience arachnophobia.

There’s A Spider On the Floor

And he jumps off! ….
Now there’s a spider on the floor, on the floor.
(repeat until you can’t stand it any longer :o)

Here is a little cutie of the Spider world……

The jumping spiders are the personalities of the spider world.

Identification
Though generally small in size, their large eyes, prodigious jumping ability, often brilliant colours and cocky, inquisitive activity make them very appealing. Many are daylight hunters, using their excellent vision to track, stalk and calculate distance, before suddenly leaping on their prey, propelled by their strong back legs.

The tropical species include some of the most beautifully coloured jumpers, notably the metallic-hued species of Cosmophasis and the green and yellow bodied, white tufted Clown Spider, Mopsus mormon, among many others. The tropics are also home to a cunningly adept predator of spiders, the sinister looking Portia fimbriata. Covered with lichen-like hair tufts, this jumper uses stalking, ambushing, web invasion and imitation strategies to attack its prey, which ranges from other other jumpers to web builders.

Habitat
Jumping spiders are diurnal and on sunny days they can usually be found on all types of vegetation. They are found in a variety of habitats.

Males are often more strikingly coloured, patterned or adorned with leg or body hair tufts than are females. They use these adornments to impress the females during often elaborate courtship displays. No group illustrates this better than the southern Australia jumpers of the genus Maratus (= Saitis). Its members could justifiably be called peacock spiders, both for the bright colours of the males and the way that they display them. Males have flap-like lateral extensions of the abdomen that fold down along each side and are edged by white hairs. When a red, blue and black coloured male of Maratus volans courts his relatively nondescript mate, he expands and raises the lateral flaps so that the abdomen forms a white-fringed, circular field of colour which is tilted up towards the female above the brightly coloured carapace, a truly spectacular sight.

Since I have something of a love affair with spiders for my writing and role playing, decided to start a blog, dedicated to my favourite arachnids.

Now, the first one I have chosen, truly is one of the most feared in Australia.  No other is quite as aggressive, and to be sure, you won’t ever forget, if you are bitten by one.

Showing a bit of aggression.

CharlotteCarrendar: -The Spider demoness, tilts her head from side to side, upon seeing that somehow a creature of this realm created a black hole with no appearance of magic (or prep) and shot it like a cannon at the foe that had so brutally and nearly almost nearly, killed the alpha female. It was a truely jaw dropping, eye widening sight, that the body was ripped apart (and was that an auto hit? yes I think it was). Trotting over to the body of the badly beaten alpha with her chest caved in and her head beaten like a watermelon with a mallet….or a bloody big sledge hammer, Charlotte would shake her head and say softly- “Such a pity…..the blood masks your beauty…and yet the hand of death did not dare lay a finger upon you. But I ask..why is it your kin are acting as though nothing has happened. Surely they be rush to save your life…ahh here comes one now…well….I leave you with this parting phrase. “Next time….oh sleeping beauty, you might not be so lucky” -she drops a funnel web spider upon the unconcious Alpha- “A gift…nothing more, but once it lands it bites….the venom sure to make sure you never waken” And with that, she vanishes in a swirl of black spiders returning to her lair-
A parting para…. “Kiss of the Spiderwoman”

Notice the difference in size, from the female to the male.

Description
The Sydney Funnel-web Spider is a very aggressive species and one of the deadliest spiders in the world. The cephalothorax is almost hairless and appears smooth and glossy black. The abdomen is black, dark brown or purplish in colour. The body and legs are covered with fine hairs. The male has more slender legs and a spur on the third segment of the second leg. This tiny spur is used to hold the female’s fangs during mating. Funnel-webs are extremely aggressive spiders and when threatened they raise their front legs high off the ground and point their fangs forward ready to strike. When they strike they drive the fangs down with force and speed.

Habitat
The Sydney Funnel-web Spider is found in rainforest and wet eucalypt forest, and has moved into shady damp areas of private gardens. They build their silk-lined burrow under a rock or log. The burrow may be up to 60cm long. Most burrows have two entrance. The burrow entrance has thicker lines of silk radiating from the entrance to form trip-lines which alert the spider when prey is near. They are attracted to water and sometimes fall into swimming pools when they are wandering.

Food
Mostly insects, although can catch prey as large as frogs and lizards

Breeding
Males reach sexual maturity at four years of age and females at five years. The male wanders in search for a mate in humid conditions after heavy rain. The Female spend most of her time in her burrow, and waits there for a mate. The male entices the female out of her burrow for mating. The female produces an egg-sac with about 100 eggs and stores it in the burrow until the spiderlings hatch.

Range
Found mainly around the Sydney area in Australia although the range extends along coastal regions of New South Wales to Queensland.

Notes
Male Funnel-web Spiders sometimes wander into buildings when they are searching for a mate, and sometimes find their way into clothing on the floor. The Sydney funnel-web spider bite is one of the most dangerous in the world. Bites can be fatal if not treated. An antivenom is available and no fatalities have been reported since its introduction. Seek medical treatment immediately if bitten.