CharlotteCarrendar, fiction, fight., Minerva, music, role play., Sisterhood, Sisters are doing it for themselves, The angel, The Blood of Kings, unity, War, Witches

842
Re: [RP] The Blackfog Castle
December 04, 2013 09:59PM
King’s chamber
~Sisters are doing it for themselves~Laying amongst the black silk cushions, Minerva had been sleeping peacefully, her chest rising and falling slowly, with her dreams filled with that of her love making to the King. An endless spool of his power and skill as a lover had her lip twitch and curl into a smile. But within that dream, the scene started to change, and it was like she was now standing on the battle field, looking directly at the King, as he fought hand to hand combat with an angel knight. He brought the Knight down to his knees, and then without warning, gripped his head and snapped the Angel’s neck, so death would be instant. The angel slipped through the King’s blooded fingers, and he roared in triumph, as all around, death reigned supreme. Minerva stood, naked in the field of battle, and the King gazed at her momentarily, as everything slowed. He spoke directly to her….

“Now is the chance. Take flight, my dark love, and seize the day. The gates to heaven’s door are unwatched by the Casterly, and a true prize awaits inside. To kill the King, you must kidnap the Queen. My power I bestow upon you, through the jewel within your collar. Do me proud…in the name of Brax!”

The battle scene again started up as the speed of movement from all went back to normal. The King was again fighting yet more Angel knights, with blood now covering much of the battle field.

“Yes…my Master and King.” Minerva said, as the scene before her vanished, and her eyes shot open, finding herself in the King’s bed. Her heart was pounding, and her trembling hand glided across her form, up to the collar around her neck. Her link with the King. It hummed as it tightened around her neck.

The King had spoken.

The scene in the throne room, was one…of absolute boredom. All the men had gone off to war and there were many left behind that were more than capable of holding their own against the armies of the House of Casterly. Lady Vampires, and witches, necromancers and seers. Three that stood out, were Minerva’s sisters; Portia, Delilah, and Ethel. Ethel was reading tarot cards, Portia was slowly brushing her hair with a vacant expression, while Delilah looked like she was plotting something, her fingers drumming together under her chin. 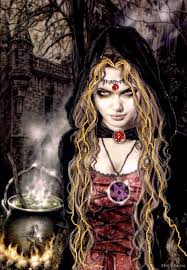 The doors to the Throne room burst open and Minerva strode in, dressed in a long black gown, that was sheer like spider silk. Her hair was worn down and flowing across her shoulders, with the jeweled collar tightly fastened around her neck.

“Sisters….Ladies of the Court of Brax…My dears. I know you are all bored silly sitting here while our men folk do battle to gain the land of Vaas.” Minerva cried out, spinning on her heel as she reached the throne dias.

“Well…I have had a vision, and my King…your King…has spoken. The Casterly are so busy, like our men…fighting on the front line…that they left their royals at home…unguarded. YES!…UNGUARDED! Now…we could all just sit here like fools and twiddle our thumbs and wait patiently for this war to end. OR….we seize…the…DAY!” This last word was said with such passion, that it would have moved all that were seated.

Delilah grinned and rose from her seat. “Do ho ho ho…you evil little witch. As luck would have it, I managed to get a lock of the Prince’s hair, so we can create a rouge…and kill two birds with one stone. I want the soul of Tempest. Ever lasting beauty awaits who drinks her essence.”

The entire room started to chatter and cackle as Minerva raised her jewelled hand.

“Then it is settled. We fly for the Castle Casterly. The Queen, and her granddaughter Tempest we shall take right from under the King’s nose. As he fights for his life….he will come back to find, his wife and kin…..gone.”

The chorus of voices erupted as many leapt from their seats and prepared to fly, no matter how, but go straight for the heart of the Casterly. The Castle…was a sitting duck.

Delilah did have one question though, as she looked at Ethel;

“How are we going to find Tempest?”

Magical Abilities: None, but a charming smile and maybe talking to animals.
Strengths: Able to handle large animals with ease, natural affinity with animals and caring for them.
Weaknesses: Seeing an animal in pain, or dying.
Likes: Animals.
Dislikes: Anyone who abuses animals.

History: Lord Thomas Bailey comes from a long line of animal lovers and enthusiasts. His Father, Lord Walter Bailey, travelled the globe in his hunt to create his own zoo, and is a founding member of the Royal Zoological society. Thomas first found a love for animals whilst travelling the wilds of India, where he had a passion for tigers and elephants. He was assured to follow in his father’s footsteps, and after graduating from university with a degree in vetinary science, he started working at London Zoo, where he slowly worked his way up and is now the head Zoo keeper. Rumour has it, that he has a strange ability to communicate with his animals…but that is all just a rumour.